Basic Principles for the Rehabilitation of Azerbaijan's Post-Conflict Territories 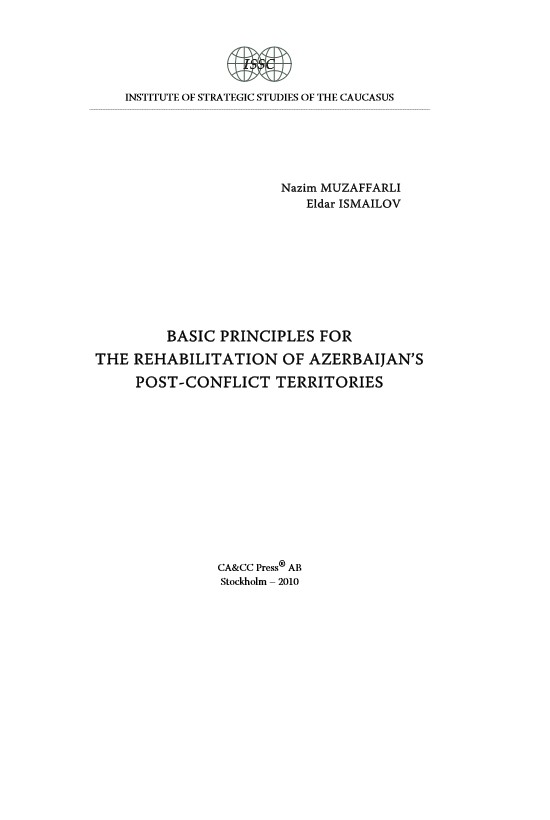 In 2010, the CACI-SRSP Joint Center cooperated with Eldar Ismailov and Nazim Muzaffarli of the Institute for Strategic Studies of the Caucasus to produce a study of the methodology and process for the rehabilitation of the occupied territories in Azerbaijan. The study was written in the hope that it would prove useful in the aftermath of a negotiated solution to the conflict.

Such a resolution nevertheless did not materialize. At present, however, it appears that some of these territories are returning to Azerbaijani control as a result of the military conflict that began in late September, 2020. While it is regrettable that this did not come to pass as a result of negotiations, it is clear that the challenge of rehabilitating territories is as pressing today as it would be in the event of a peaceful resolution - if not more, given the likelihood that such a solution would have included a time-table and provided the Government of Azerbaijan and international institutions time for planning.

It is clear that the study is a product of a different time, as much has changed since 2010. We fully expcect many updates and revisions to be needed should the recommendations in this study be implemented today. That said, we believe the methodoloy of the study and its conclusions remain relevant and would therefore like to call attention to this important study, published in English, Russian and Azerbaijani versions.

BASIC PRINCIPLES FOR THE REHABILITATION OF AZERBAIJAN’S POST-CONFLICT TERRITORIES