It's tempting to blame the country's recent slide into repression on President Recep Tayyip Erdoğan's thirst for personal power. But did the ruling Islamist party ever really abandon the country's long tradition of state authoritarianism? 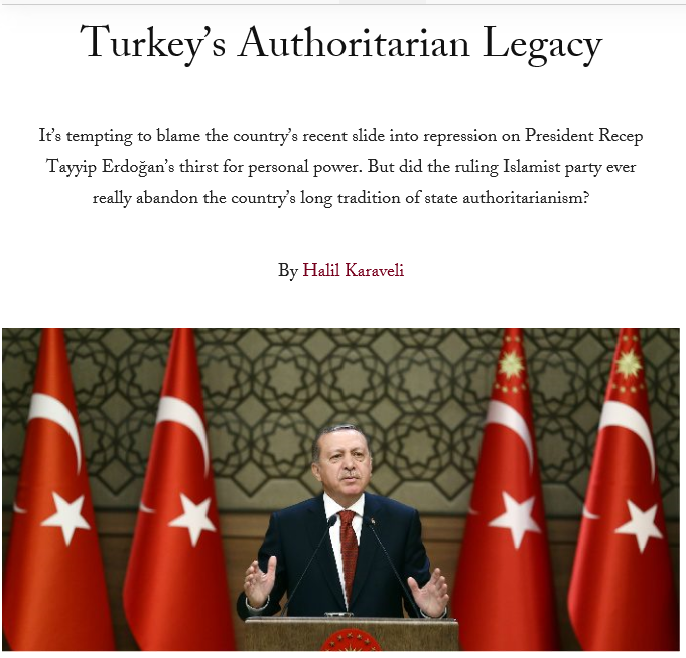 For years, explaining Turkey's democratic travails seemed an easy task. There was the persistence of an authoritarian tradition, whose source was identified as Kemalism—the secularist-nationalist founding ideology of the Turkish republic—and which the military embodied. According to the conventional narrative on Turkey, with which anyone who has only casually followed international politics during the last decades will be familiar, the Turkish military had a mission—to "protect secularism"—which explained, so we were taught, its habit of overthrowing governments. All that was needed for Turkish democracy to flourish was the emergence of a force strong enough to end the tutelage of the military.

For several years, the rise of the moderate Islamist Justice and Development Party (AKP) and its leader, Recep Tayyip Erdoğan, seemed to be the answer. The general consensus among international observers was that Erdoğan was on a mission to make Turkey fully democratic. Disappointment and bewilderment have increasingly replaced that hope, particularly after an April referendum engineered by Erdoğan expanded the executive power of the president. There's a scramble for explanations and definitions that will make sense of and conceptualize Turkey's authoritarian drift under Erdoğan, the presumed liberal-turned-authoritarian.

The problem at the heart of the matter is that Turkey lends itself all too easily to simplistic dichotomies and to exoticism. The currency of these dichotomies, in turn, reveals an unmistakable, residual orientalism, as in Edward W. Said's framing. Turkey is, invariably, a place where "East meets West," where "secularism" and "Westernization" fatefully collide with "Islam." Western scholarship has long since abandoned the modernization paradigm of the 1950s and 1960s that was applied to the Middle East by orientalists—of whom Bernard Lewis was a leading exponent—and into which Turkey was fitted as a model example of a "modernizing" Muslim country. The judgment of Patrick Kinross, the biographer of Kemal Atatürk, that the founding father of Turkey "dragged his country from the Middle Ages to the twentieth century," couldn't sound more anachronistic—and unacceptably orientalist—today. Yet orientalism nonetheless continues to hold sway. Turkish politics is still understood in essentialist terms, within a framework that pits "Western" against "Islamic."

The only thing that changed when the moderate Islamists came to power was that the role that had traditionally been ascribed to the Turkish actors was reversed: now it was the former Islamists, who had recast themselves as "conservative democrats," that were assigned the role of the modernizers, while the former heroes of the modernization paradigm, the secularists, were redefined as reactionaries who impeded democratization. In practice, nothing changed.

Alain Rouquié, a French political scientist, advances the definition "hegemonic democracy" to describe regimes like Erdoğan's Turkey (and Vladimir Putin's Russia): they are not liberal democracies, because the rights of the minority and the rule of law are not respected; but neither are they dictatorships, because elections are held, and political alternation thus remains possible. Yet, this is increasingly so only in theory. Turkey may not be a dictatorship—elections are held, and President Erdoğan and his party continue to enjoy broad popular support—but the rule of law and freedom of expression remain as elusive as ever.

Last November, Turkish authorities arrested Selahattin Demirtaş and Figen Yüksekdağ, the co-chairmen of the pro-Kurdish and moderately leftist People's Democratic Party (HDP)—the country's third-largest party in terms of voters and representation in parliament. Other party lawmakers, as well as the co-mayors of Diyarbakir, the main Kurdish city of Turkey, were also detained. The prosecution called for what would amount to life imprisonment of the leaders of the Kurdish party. Meanwhile, Turkey has come to hold the dishonorable world record for imprisoning journalists, by far distancing China and Iran. They include editors and board members of Cumhuriyet, the oldest daily of Turkey. Journalists are routinely accused of abetting the cause of either the outlawed Kurdistan Workers' Party (PKK)—the separatist Kurdish organization that has fought an insurgency against the Turkish state since 1984—or the cause of the Muslim cleric Fethullah Gülen, Erdoğan's erstwhile ally, effectively exiled in Pennsylvania with whom the Turkish president has been locked in a violent power struggle since 2012. The editors of Cumhuriyet stand accused of having supported both PKK and the "Fethullah Gülen terror organization."

Halil Karaveli is senior fellow in the Silk Road Studies Program of the Central Asia- Caucasus Institute where he heads the Turkey Initiative and is editor of Turkey Analyst. From 1991 to 2007, he was an editorial writer at Östgöta Correspondenten, a Swedish daily. He has contributed to the New York Times, Foreign Affairs, and National Interest.

Image attribution: www.thecairoreview.com  accessed on May 1, 2017