Violence in Andijan, 13 May 2005: An Independent Assessment 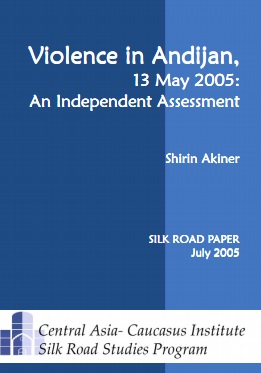 I was the co-director of a NATO Advanced Research Workshop (ARW) on “Global Security Challenges in Central Asia: Impact of Aggressive Religious Extremism and Terrorism on Central Asian States”, to be held in Tashkent 26-28 May 2005. The event was aborted on 18 May, following the decision of NATO Council to ‘postpone indefinitely’ this undertaking. The decision was taken in reaction to reports of violence in Andijan on 13 May.

Canceling the project at this late stage meant that there were organizational details which had to be resolved in person. Accordingly, I went to Tashkent 21-29 May (using the air ticket that had been purchased previously) to attend to these matters. When I was in Tashkent, I made time to visit Andijan. This report is based on my findings there.

My main reason for going to Andijan was to try to understand what had happened on 13 May, as I found the media reports confusing and inconsistent. I had good access in Andijan and was able to visit important locations (e.g. hospital, prison, cemeteries) and to speak to a wide range of people. I do not pretend to have definitive answers, but my tentative conclusions are as follows:

o The death toll was probably closer to the government estimate (i.e. under 200 deaths) than to the high estimates (1,000 and above) given in media reports.

o The action was initiated by armed, trained insurgents, some of whom came from outside Uzbekistan.

I did not find indications that the action was driven by religious or socioeconomic demands. It seems likely that the motive was political, intended as the opening phase of a coup d’état, on the lines of the Kyrgyz model. The choice of 13 May was, I believe, significant: it was a Friday, the main day of public prayer, and the insurgents appear to have believed that they could rally popular support by linking their action to a religious cause, underlined by the freeing of imprisoned members of the banned Islamist Akromiya movement. This did not in fact happen. I suspect that this incident was not an isolated occurrence, but part of a power struggle that will continue for some time to come.

The international reaction to the Andijan violence was largely shaped by sensational media reports which portrayed the incident as the deliberate massacre of innocent civilians. Very little mention was made of the fact that the insurgents were armed and that they had quite clearly planned the event as a military operation.

In Uzbekistan, some people supported the condemnation of the government by Western sources, but others (from a variety of backgrounds) felt that it was unjustified and opportunistic. It is likely that Uzbekistan will now review its foreign policy priorities. The result will probably be greater emphasis on relations with Russia and China, possibly also with other countries such as Iran and India. It seems likely, too, that participation in the Shanghai Cooperation Organization will receive new impetus. Internally there will probably be a crackdown on human rights activists and NGOs.