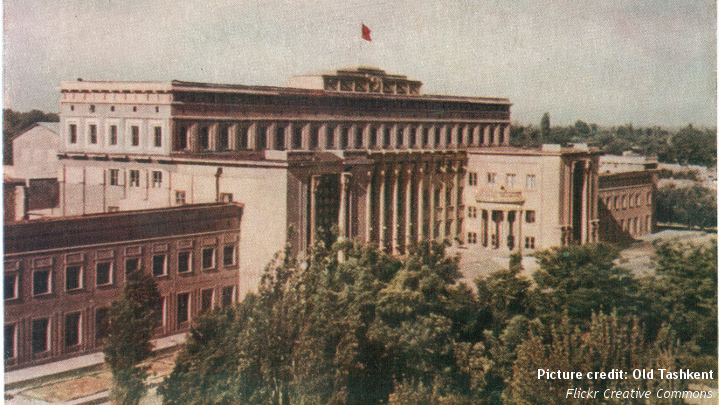 Executive Summary
This paper examines party problems and factionalism in Soviet Uzbekistan, covering the period from the creation of the republic in 1924-1925 to independence in 1991. More specifically, it focuses on the social basis of politics, the existence of place-based elite networks, faultlines of conflict within the Uzbek elite, the prevalence of national and/or regional solidarities, and centralization and decentralization of appointment power.

The prevailing theory on the subject is that politics in Soviet Uzbekistan was defined by indigenous "clans" or regional "solidarity networks", resulting from traditionally strong family bonds and a clan-based social structure. This literature is not uniform but adherents share the assumption that the largely pre-modern Central Asia compelled strong loyalties directed to one's place of birth, district, or province rather than to the nation or even the communist party. Thus, when given an opportunity, senior Uzbek officials stacked offices with individuals from their home-town or region of origin and ignored formal Soviet appointment rules. Moscow, on the other hand, had to maintain a delicate balance between these groups so as to prevent any one of them from becoming to hegemonic, lest they challenge its authority.

Several books and dozens of articles have been published on Uzbekistan's "clans" or solidarity groups but none of them, notably, build on primary archival sources. Still only contemporaneous archival documentation could, conceivably, shed light on Soviet authorities' perception of patronage and whether it was viewed as distinct from that exercised elsewhere in the USSR.

This paper aspires to fill this gap. It draws on archival evidence from Moscow's RGASPI and RGANI archives and documentation of the Party Control Commission which monitored party violations in the Soviet Union. The Commission neatly described and categorized forms of patronage, the presence of nepotism and localism (zemlyachestvo or mestnichestvo), and tribal influences in each republic and is, as such, an invaluable resource on this subject. The focus is Soviet Uzbekistan although plenty of material has been drawn also from other Soviet republics. Whether locally based loyalties were more or less present in Uzbekistan than elsewhere in the Soviet Union can, needless to say, only be assessed comparatively.

The main findings are: First, the archival record contains scant evidence that subnational loyalties were a major problem in Soviet Uzbekistan. While there were rifts these were mostly limited to antagonisms between Uzbeks and Russian/Slavs in the Central Committee, "groupism" in the agricultural sector on the specific technologies to be used, and oligarchic decision-making in obkom and republican bodies. Locally based loyalties were noted elsewhere in the Soviet Union, especially in Tajikistan, Kazakhstan, Azerbaijan, Ukraine, and several Russian oblasts but only rarely in Uzbekistan. This held true even during Khrushchev's union-wide crack down on zemlyachestvo in the 1960s.

Soviet authorities did adopt a policy to balance the neighboring Turkmen tribes in the 1920s. But no such policy was ever considered for Uzbekistan, presumably because the social structure of the nomadic Turkmen was greatly different from the settled Uzbeks and Moscow shared this preconception. If anything, Uzbeks were considered highly capable and generally advanced and were therefore also dispatched to staff party and state apparatuses in neighboring republics.

That particular regions dominated politics in early Soviet Uzbekistan while others lost out owed to events coinciding with the Bolshevik conquest. Stalin decimated the disloyal Kokand autonomy and its elite, Bukhara was bought off, and the historical power center Khwarazm was too backward to compete for political power. Thus figures from Tashkent, Bukhara, and to a lesser extent Ferghana – the economically, demographically, and politically most important component parts of the republic – came to dominate the new republic.

Second, the supremacy of any one or two of these regions at later points in time could be explained by Moscow's intricate "hierarchy of regions" in which cadres were drawn from the most important oblasts, the ranking of which varied over the Soviet period; Minsk and Vitebsk filled analogous roles in Belarus, just as Vilnius and Kaunas did in Lithuania.

Notably, however, when power over cadre appointment was extensively decentralized, principally during the Brezhnev era, this hegemony dissolved. At no point in Soviet Uzbekistan's history did members of the Central Committee Bureau (the highest party organ) hail from more varied regions than during the zenith of Rashidov's powers, who served as First Secretary throughout the Brezhnev era.

Third, in Uzbekistan, as elsewhere in the USSR, coalitions of protégés formed at the oblast and republican-levels primarily among former co-workers and associates. Region of origin played a marginal role at most in this calculus, as archival documentation cited in this paper attests to. That the Uzbek elite typically served in several provinces during their careers diversified loyalties beyond home regions. Coalitions formed among figures of diverse origin, resulting in essentially non-territorialized factions. This diversity was arguably more pronounced than elsewhere, not less. This explains in part why zemlyachestvo was a marginal concern in contemporaneous archival documentation.

Fourth, the party violations pinpointed by the Party Control Commission in Soviet Uzbekistan were scarcely unique: Foot-dragging on policy implementation, nepotism at lower levels, embezzlement, theft, concentration of powers, misuse of state funds, low numbers of figures from working class backgrounds in governing positions, failure of plan fulfilment, wrecking and sabotage under Stalin, a lenient approach to national/religious sentiment, exclusion of local nationalities, "groupism", corruption, and speculation. These were to varying extents observable in the Western parts of the empire as well. The only special concerns in Central Asia appears to have been Uzbeks' "feudal attitude towards women" and, possibly, a high turnover of cadres.

Fifth, appointment power was not uniform over time in Soviet Uzbekistan. Apart from the lax Brezhnev era, noted above, the period in which the Uzbek leadership had greatest freedoms in selecting their associates was, paradoxically, under Stalin in the 1940s. During the pre-1937 era and under Khrushchev and Gorbachev the Uzbeks' room for maneuver was highly circumscribed. The notion of Uzbek "clans" that alternated in power is thus a gross simplification since the center often exercised its prerogatives over the nomenklatura, leaving no or little room to fill the highest offices in the republic.

Sixth, Uzbekistan as a territorial entity only began to appear on maps in 1924-1925. Recent statehood has been viewed in the literature as one explanatory factor for strong pre-national regional loyalties. While this may make sense theoretically, archival documentation rather points to the opposite: National solidarities crystallized quickly among the elite, if for no other reason than that these officials owed their careers to Stalin's "affirmative action" policies and the creation of an Uzbek republic. Factionalism existed in the early days, doubtlessly, but this was rarely influenced by sub-regional loyalties.

Such national sentiments reached their heights during the Yusupov period, who ruled Uzbekistan from 1937 to 1950, and also under Rashidov. Rashidov was, in many ways, a product of Yusupov's Uzbekistan and the recovery of Uzbek history that took place under Yusupov's reign. Nationalism became a potent force in Soviet Uzbekistan, and the Uzbek elite coalesced around this idea. Noteworthy is that Stalin often sided with the Uzbeks against the Russian prefects stationed in the republic, thereby encouraging the emergence of an increasingly cohesive and nationalistic Uzbek elite.

Seventh, older readers may remember the "cotton scandal" in the mid-1980s, in which hundreds of Uzbek officials were purged following revelations of widespread corruption, embezzlement of cotton, and "mafia-rule". This, it seems, was also the catalyst of the clan/region hypothesis pioneered in 1985 by an article on Uzbek "regionalism". This theory of extensive nepotism and subnational loyalties corresponded seamlessly with the picture portrayed by the Prosecutor General's anti-corruption investigators, Telman Gdlyan and Nikolai Ivanov, as well as that of Rashidov's successor Inamzhon Usmankhodzhaev. In 1988 Soviet central media began referring to "clans" in Uzbekistan and shortly thereafter, in 1989, Western scholars too adopted this concept. This chronology raises the question whether the notion of "clans" in Uzbekistan was a genuinely scholarly finding or an appropriation of a propagandistic word used by Soviet authorities that took a life of its own.

This, in summarized form, is some of the evidence that compel a re-evaluation of politics in Soviet Uzbekistan. Of course, this paper does not portend to have said the final word on the topic. Other archival evidence or oral testimony may surface that challenge these findings. But on the basis of evidence examined by this author there are few reasons to conceive of factionalism and party problems as different from republics in the western non-Muslim parts of the empire. There were some distinctive features, to be sure, but "clans", tightly organized regional solidarity groups and the like were not among them. Some may find this argument strange since most leading Central Asia scholars have affirmed the existence of these groups. Even so, a literature can easily be susceptible to mythmaking when authors cite each other as evidence and there is no original account, based on primary sources, from where claims stem.