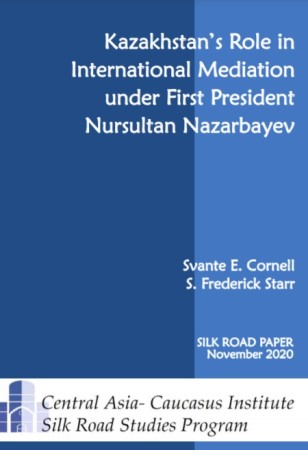 In the past decade, Kazakhstan has emerged as an important player in the world of mediation of international disputes. Its role in convening the Astana talks on Syria are the most well-known example, but Kazakhstan’s activity goes far beyond this. In fact, involvement in international mediation has emerged as yet another facet of Kazakhstan’s foreign policy, alongside its high profile in multilateral organizations.

In fact, Kazakhstani mediation builds on two aspects of Kazakhstan’s foreign policy: the country’s multi-vector foreign policy and its activism in international institutions. Landlocked, surrounded by large powers and closely tied to Russia by economics and demographics, Kazakhstan’s efforts to assert its independence have always been a balancing act. Kazakhstan’s First President, Nursultan Nazarbayev, established the country on the international scene in the 1990s primarily by his historic decision to renounce Kazakhstan’s nuclear weapons, and his careful efforts to build independent statehood in the political realm while simultaneously working to restore economic integration among former Soviet states. Kazakhstan’s model has been to maintain close relations with Russia, but simultaneously to strive to strengthen its ties with other partners – first China, then the United States, subsequently Europe and Asian powers – to obtain a positive balance in its foreign relations. This “multi-vector” foreign policy has since become a model that has been adopted by the Central Asian region as a whole.

An active role in multilateral diplomacy was key to Kazakhstan’s foreign policy from the beginning: immediately upon independence, Nazarbayev initiated the idea of a Conference on Interaction and Confidence-Building in Asia, which materialized in the decade that followed. Kazakhstan also took on an active role in the Organization for Security and Cooperation in Europe, becoming the first post-Soviet state to chair the organization in 2010. Not stopping there, Kazakhstan successfully campaigned for a non-permanent seat at the United Nations Security Council, and served on the Council from 2017 to 2019.

Kazakhstan’s first initiative in the field of international mediation took place already in late 1991, when President Nazarbayev partnered with Boris Yeltsin to seek to mediate the conflict between Armenia and Azerbaijan. But it is in the past decade that these efforts have been rekindled, against the background of a gradual intensification of geopolitical competition in Eurasia writ large. Kazakhstan’s first effort took place during its OSCE Presidency, when it intervened to attenuate the crisis in neighboring Kyrgyzstan. By assisting in removing ousted President Kurmanbek Bakiyev from the country, Kazakhstan contributed to easing tensions in the country.

Kazakhstan next focused on nuclear diplomacy, an issue with which the country had considerable familiarity. After offering to host an international Low Enriched Uranium Bank, President Nazarbayev succeeded in hosting two successive summits in Almaty on the Iranian nuclear program in 2013. These efforts aimed at seeking a negotiated solution that would halt the escalation of tensions that risked a greater military conflagration. While talks in Almaty did not resolve the matter, they directly paved a way for the Geneva talks that eventually led to the Joint Comprehensive Plan of Action (JCPOA) on the Iranian nuclear program.

Over the following several years, Kazakhstan focused on alleviating tensions among its close partners – Russia, Turkey and the West. In 2014, Nazarbayev sought to bridge the divide between Russia and the West on Ukraine. Kazakhstan played an active role in facilitating dialogue among Russia, Ukraine, France and Germany that manifested in the Normandy Format. Two years later, Kazakhstan took a hands-on approach in resolving – at least for a time – the dispute between Russia and Turkey that resulted from the Turkish downing of a Russian jet over the Turkish-Syrian border in 2015. The next year, building on this initiative, Turkey and Russia agreed to President Nazarbayev’s offer to host talks on the Syrian conflict. Several rounds of “Astana Talks” have taken place since, involving the Syrian government, opposition groups, and the key external powers in the conflict – Russia, Turkey, and Iran.

What, then, has been the function and rationale of Kazakhstani mediation efforts?

Kazakhstan’s mediation has not been focused on faraway lands: it has been focused very much on those areas that affect the geopolitical stability of Eurasia, which in turn is the determinant for Kazakhstan’s own stability. Thus, it has concentrated on crises right on Kazakhstan’s doorstep, like in Nagorno-Karabakh and Kyrgyzstan, as well as on disputes that involve the regional and great powers of Eurasia. Both types of crises involved confrontations that threatened to destabilize the geopolitics of Eurasia, and thus posed a threat to Kazakhstan’s own security. Kazakhstan’s economic development and strategic stability is directly correlated to the relative harmony of the broader Eurasian geopolitical environment, and it has been in its interest to work to mitigate such threats to stability.

Kazakhstan’s efforts strengthen its sovereignty in at least two ways. First, it adds another layer of goodwill and recognition to Kazakhstan’s international profile. Secondly and more importantly, it provides regional powers with a strong rationale to accept Kazakhstan’s neutrality in their mutual disputes. Kazakhstan has been able to demonstrate that it is more useful for everyone as a neutral power that does not take sides – in other words, more useful as a mediator than as a supporter. For example, while Russia would have liked Kazakhstan’s endorsement of its policy in Ukraine, Kazakhstan showed that it could, uniquely, serve as a go-between that allowed Russia a way to manage its relations with Western powers, something that would be impossible in the absence of Kazakhstan’s sovereignty and international credibility.

This strategy has pitfalls. Its success requires that the level of conflict between Eurasian regional powers remains manageable; and that these powers are, at all, interested in maintaining a dialogue. If regional powers are in mortal competition against each other, Kazakhstan’s efforts would be undermined.

Against this background, the impact of Kazakhstan’s efforts become clearer. Kazakh leaders were realistic about the limited prospects of success in resolving the thorny issues they addressed. Instead, they were focused primarily on managing the fallout of these conflicts on a geopolitical level, seeking to prevent their escalation in a way that would jeopardize the broader stability of the Eurasian continent.

Kazakhstan’s efforts in international mediation have been closely tied to the personality of its First President, Nursultan Nazarbayev. Will Kazakhstan continue to play a role in mediating the great power politics of Eurasia in the longer term? There is reason to believe it can, for two key reasons. First, Kazakhstan’s meritocratic approach to personnel policy in foreign affairs has enabled the country to develop a considerable pool of officials with experience of high-level international politics, beginning with its current president, Kassym-Jomart Tokayev, who has among other served as Head of UN offices in Geneva. Second, demand for this type of efforts is not likely to abate, as strategic competition in Eurasia continues to intensify and efforts to mitigate the fallout of great power competition in Eurasia appear to be more necessary for every passing year.