Between Bandits and Bureaucrats: 30 Years of Parliamentary Development in Kyrgyzstan 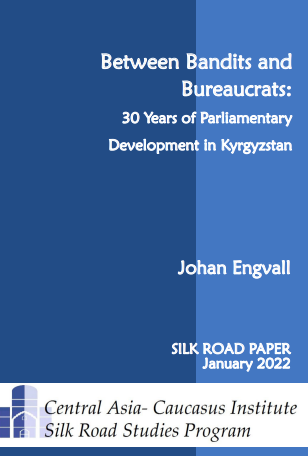 In 2010, Kyrgyzstan took a decisive step towards establishing a parliamentary form of government. A decade later, the parliamentary experiment had, at least for the time being, come to an end; in January 2021, the Kyrgyz electorate approved the return to a presidential form of government, and in May 2021, a new presidentialist constitution was adopted. To understand, the role and powers of Kyrgyzstan’s parliament, unparalleled in the Central Asian region as well as in most other post-Soviet countries, this study details the evolution of this particular political institution over the past 30 years. It details continuities and changes, the interplay between formal rules and actual parliamentary practices, and analyses how the constitution of this political body has shaped its performance over the years. The conclusions reached in the study should help to inform the understanding of why Kyrgyzstan’s national legislature proved unable to deliver on the promises of a parliamentary-style system of government.

Independence in 1991 meant that Kyrgyzstan’s Soviet-elected 350-member strong Supreme Soviet overnight became the national parliament of a sovereign state. It became clear that the legislature did not take this newfound status lightly. It quickly emerged as a focal point of debates over the future course of the new state, often positioning itself in opposition to the country’s first President Askar Akaev. Its willingness to provide some checks and balances on executive authority as well as its adoption of several landmark laws, would lead the parliament to go down in Kyrgyzstan’s history as the “legendary” parliament. However, it was also a peculiar institution, created for the altogether different Soviet system. It met only in sessions, and the lack of continuous legislative work was hardly compatible to the systemic transformation that Kyrgyzstan had set out to accomplish. Many of its members simultaneously held positions in various executive bodies. Because of that, the separation of powers was unclear and the fact that a large portion of the members of parliament (MPs) was dependent on other state jobs for their livelihoods, enabled President Akaev to disband its services a year before its term had expired.

In 1995, Kyrgyzstan held its first competitive elections to fill a thoroughly revamped parliament that now had adopted its Kyrgyz name, Jogorku Kenesh (Supreme Council). It was a much smaller legislature, consisting of two chambers with a total number of 105 MPs elected in single mandate districts. This formative election turned out to be highly competitive and resulted in a legislature dominated by public officials and an emerging group of businessmen, who had benefited from the early privatization process. In this new competitive environment, many members of the “legendary” parliament failed to be re-elected. While the new parliament had to find its feet amidst organizational shortcomings and Soviet inertia, it nevertheless managed to promulgate an impressive number of new laws, although many pieces of legislation were hastily adopted and poorly implemented. Overall, the parliament retained a rather independent position and did not turn out to be as obedient to the executive as President Akaev had hoped for it to be.

The successor parliament with curtailed formal powers, following constitutional referendums in 1996 and 1998, respectively, was elected in 2000; again, the elections were competitive, but circumscribed by several fraudulent practices and an aggressive use of administrative resources in order to secure the outcome preferred by the authorities. A limited party quota had been introduced for some of the seats, but overall businessmen and bureaucrats from the central and regional levels continued to define the parliament’s composition. The parliament appeared pliant to begin with, but several controversial decisions taken by President Akaev forced an increasingly radical parliamentary opposition to emerge. Conventional parliamentary opposition did not characterize their oppositional activities as much as the practice of organizing mass protests.

Ahead of the 2005 parliamentary elections, constitutional changes pushed through a referendum ended Kyrgyzstan’s decade with a bicameral parliament. A new unicameral legislature, with a significantly reduced number of seats for grabs exclusively in single mandate districts, raised the stakes further for electoral competition. At a time when President Akaev’s popularity had long been in decline, the authorities nevertheless applied their best efforts to secure the desired electoral outcome. Losing candidates challenged the election results by organizing protests throughout the country, eventually building up to nationwide opposition movement against the incumbent leadership. When the protests reached the capital Bishkek, President Akaev fled the country. Following this first color revolution in Central Asia, new president Kurmanbek Bakiev confronted a couple of years of strong parliamentary opposition, which thwarted his attempts to establish authoritarian rule in the country. Eventually, in 2007, after two years of recurring mass protests on the streets of Bishkek led by the parliamentary opposition, Bakiev managed to co-opt the sufficient amount of MPs necessary to push through a new presidentialist constitution. He then dissolved the parliament and announced a snap election to bring the legislature in line with the new constitution.

The snap parliamentary vote brought about a legislature that was entirely new in its form. It was exclusively elected on the basis of proportional representation from nationwide party lists. Bakiev and his entourage ensured their control of the new legislature by quickly and effectively organizing a pro-presidential party, Ak Jol, which duly emerged victorious with 71 of 90 available seats. With this parliament in their pocket, the president and his family members fully displayed their repressiveness. However, when growing frustrations among the elites and people canalized into sudden protests, the Bakiev regime quickly collapsed, despite its efforts to suppress the revolt. The new interim leadership quickly dissolved the parliament and cancelled the constitution.

Ahead of the election of a new parliament, the interim government introduced a new constitution, which stood out in the post-Soviet context; for the first time since Moldova in 2000, a post-Soviet country declared its ambition to establish a parliamentary-style system of government. The electoral system retained the proportional system based on national party lists introduced by Bakiev, but to prevent the emergence of a dominant party, the maximum number of seats a party could hold was fixed at 65 out of 120 seats. The assumption being that this would prevent Kyrgyzstan from slipping back towards authoritarianism. From a competitive point of view, the election was a success: it brought five evenly matched parties into the parliament, demonstrating the realness of political competition. For the first years, the parliament well and truly emerged as the focal point of political decision-making and debate in the country. Nonetheless, the parties were typically only formal shells with little real party content, and therefore most of them disintegrated from within. The coalition governments formed around parliamentary majorities fell apart in quick succession, leaving the role of the prime minister in this divided executive system increasingly subordinated to the president. In this environment, President Almazbek Atambaev did not have to resort to particularly repressive means in order to re-establish the presidency as the focal point of the political system.

This tendency strengthened further after the election of a new legislature according to the same basic rules in 2015. It has served during the tenure of three different presidents, with the main distinguishing feature being its unconditional support for the various heads of states’ taking the country in an ever more authoritarian direction. Thus, the last parliament represents a litany of failures: it has failed to serve as a safeguard against presidential authoritarianism, it has failed to contribute any significant reform legislation and it has failed to strengthen the development of political parties.

Over the course of the past three decades, Jogorku Kenesh’s development has been a process of trial-and-error; progressive elements interact with regressive elements in defining the entire spectrum of parliamentary practices – from campaigning to composition and performance. The search for the parliament’s rightful place in Kyrgyzstan’s political system has been at the heart of much political debate and numerous constitutional and electoral changes. The recurrent changes in the formal rules of the game have forced political elites to adapt their behavioral strategies to a fluctuating environment. Despite the introduction of special quotas and the efforts to foster the rise of political party representatives based on ideological interests, the typical MP consists of a 50-year-old Kyrgyz man with a strong provincial attachment and a primary background in various business activities for whom party affiliation is an exchangeable political commodity.

This leads us to the peculiar role of political parties in Kyrgyzstan’s political system. The party market in Kyrgyzstan is richly supplied, and a defining feature has been the inability of presidents to create viable ruling parties, unlike in other Eurasian countries. However, Kyrgyzstan’s party system is extremely fragmented and weakly institutionalized; parties primarily, serve as temporary vehicles for particular political interests, not as channels for political representation. Their ideological platforms are underdeveloped with little in terms of concrete policy programs. Instead, they increasingly tend to position themselves by emphasizing lofty values related to cultural and nationalistic specifics of the Kyrgyz nation. In practice, the party system placed at the center of the parliamentary-style system boiled down to little more than a political label required in order to compete in election, but had little meaning otherwise.

The parliament in general and political parties in particular have been subjugated to a powerful market logic. Financial muscles have been key to securing access to parliament. Under proportional representation based on party lists, parties put a price on their slots, turning parliamentary mandates into subjects of an internal market. As candidates entered the parliament against the backdrop of large financial contributions, reportedly often amounting to several hundreds of thousands of dollars, they have had strong incentives to return their investments. Consequently, the parliament has emerged as a marketplace for transacting corrupt deals.

Overall, Kyrgyzstan’s parliament has played a dynamic role in the country’s political development. In some periods, it has been at the heart of the political struggle and provided some checks and balances, if erratic, on presidential authority. In other periods, it has served as a more pliant rubberstamp body. Over time, the technical, procedural and organizational framework for parliamentary work has steadily improved. At the same time, the corps of parliamentarians have become ever more primitive in its composition. While the “legendary” parliament represented the political, economic and intellectual elite of Kyrgyzstan, the last parliamentary convocations, defined by financial resources, have dissolved any remaining boundaries for the qualities needed for being entrusted with a parliamentary mandate. As a result, a group of “entrepreneurs,” including oligarchs, racketeers, bazaar owners, construction magnates and civil servants with concealed business interests, has established a strong grip over parliament, to the detriment of the supply of nationwide legislation and the establishment of mechanisms of accountability to the electorate.

Finally, in a comparative perspective, Kyrgyzstan’s disappointing “parliamentary decade” from 2010 to 2020, mirrors the governance crises that have beset the other post-Soviet states attempting to establish a parliamentary system of government – Armenia, Georgia and Moldova. These challenging experiences underlines the complexity of democratization in states suffering from immature state institutions and low levels of economic development. It also reveals that, in such contexts, increased political competition is by no means likely to lead to improved governance, in terms of delivering state services and the adoption of sustainable economic development. This suggests the somewhat disheartening conclusion that the state must first get its core functions in place, such as the provision of elementary law and order and basic economic and social security, before a truly viable form of government characterized by meaningful political competition is likely to take hold. In short, a separation should be made between the normative aspects of democratization, i.e. the inherent virtues of pluralism, freedom and competitiveness, and the empirical relationship between on the one hand democratization and the quality of government, corruption and economic development, on the other.

National Ideology and State-building in Kyrgyzstan and Tajikistan