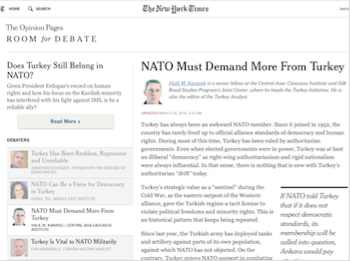 Turkey has always been an awkward NATO member. Since it joined in 1952, the country has rarely lived up to official alliance standards of democracy and human rights. During most of this time, Turkey has been ruled by authoritarian governments. Even when elected governments were in power, Turkey was at best an illiberal “democracy” as right-wing authoritarianism and rigid nationalism were always influential. In that sense, there is nothing that is new with Turkey’s authoritarian “drift” today.

Turkey’s strategic value as a “sentinel” during the Cold War, as the eastern outpost of the Western alliance, gave the Turkish regime a tacit license to violate political freedoms and minority rights. This is an historical pattern that keeps being repeated.

Since last year, the Turkish army has deployed tanks and artillery against parts of its own population, against which NATO has not objected. On the contrary, Turkey enjoys NATO support in combating “terrorism.” Under this pretext, the Turkish armed forces have destroyed several Kurdish cities in the southeast of the country, killing hundreds of civilians and forcing hundreds of thousands of people to flee.

It is a common mistake to attribute everything that has lately gone wrong in Turkey solely to President Erdogan. In fact, Erdogan has entered into an alliance with the military, which has regained much of its former power. Erdogan is executing policies that have been prescribed by the Turkish general staff. Turkey's meddling in Syria -- supporting diverse jihadist groups in order to check the Kurds -- is also fully in line with the nationalist, anti-Kurdish priorities of the Turkish military, and this policy is being conducted in concert between the civilian government and the military.

If Turkey continues to lay its Kurdish cities to rubble, it will become increasingly difficult to keep up the fiction that it belongs in NATO, to maintain that it embraces any of the democratic values that the Western alliance purports to stand for. But, Turkey’s NATO membership offers the alliance leverage. It’s only that Turkey has never before had to make a choice between continued NATO membership and authoritarian practices; it has always been able to have it both ways.

For once, NATO ought to try to influence Turkish policy in a liberal direction. Being isolated from the West is something that the Turkish regime fears. Therefore, if NATO were to tell Turkey that if it does not respect democratic standards, its membership will be called into question, Ankara is going to pay attention. Ultimately, the question is not so much “does Turkey belong in NATO” as “how much does NATO stand for the values that it is officially committed to?”