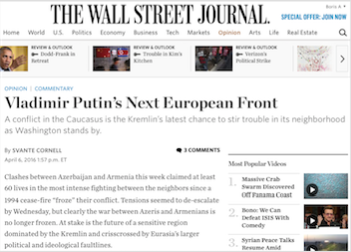 Clashes between Azerbaijan and Armenia this week claimed at least 60 lives in the most intense fighting between the neighbors since a 1994 cease-fire “froze” their conflict. Tensions seemed to de-escalate by Wednesday, but clearly the war between Azeris and Armenians is no longer frozen. At stake is the future of a sensitive region dominated by the Kremlin and crisscrossed by Eurasia’s larger political and ideological faultlines.

The Obama administration apparently believes the Armenian-Azeri conflict exists in a vacuum, isolated from regional tensions and the destructive role played by Vladimir Putin’s Russia. It’s time for Washington to see that Moscow is a part of the problem, not the solution, and take the lead in putting the conflict on the path to peace.

This is an old conflict over a province in Azerbaijan, Nagorno-Karabakh, whose population is majority ethnic Armenian. War broke out in the early 1990s as the two sides came to blows over the region during the dissolution of the Soviet Union. Since the 1994 cease-fire, the “line of contact” between the province and the rest of Azberbaijan’s territory saw only intermittent violence. That has changed in the past two years. In the summer of 2014, serious fighting erupted, killing at least 19 soldiers. Azerbaijan downed an Armenian helicopter that November, and 2015 saw new bouts of fighting in which more than two dozen soldiers were killed. This year the fighting appears to have begun as soon as the snow on the mountains melted.

The conflict is escalating now for a reason: The Caucasus is increasingly shaky. Since the early 1990s, the Armenian-Azerbaijani conflict has been at the center of a political divide in the region. Moscow backed Armenia, and the unresolved conflict kept Armenia tightly in Moscow’s camp. That alienated Azerbaijan, which allied with Turkey and the West in response. Iran, fearful of a secular and oil-rich Azerbaijan courting the U.S., aligned with Armenia and Russia.

Then came President Obama’s “reset” with Russia, which seemed to reward Moscow’s aggression against Georgia in 2008. More recently, Mr. Obama resisted the advice of members of his cabinet and only halfheartedly opposed Russia’s dismemberment of Ukraine and propping up of the Assad regime in Syria.

When Russian cruise missiles started hitting Syria from warships in the Caspian Sea last year, the politics of the former Soviet space and the Middle East began to merge. The Turkish-Russian confrontation hastened the process, since Azerbaijan is aligned with the former and Armenia is allied with the latter.

Adding to Mr. Putin’s problem in the region, Azerbaijan is the only country bordering both Russia and Iran, and so is crucial to any East-West corridor linking Europe to Central Asia and beyond. Controlling that artery is essential to Mr. Putin’s imperial project. Relations between Azerbaijan and the U.S. were cold for years, since Azerbaijan resented America’s lack of engagement in the region’s security and Washington focused on Azerbaijan’s human-rights defects. But last year they began to thaw.

Several high-level U.S. delegations have passed through Azerbaijan to discuss political and military ties, and the country’s talks with the European Union on strategic partnership are back on. In a gesture of goodwill, Azerbaijan has released dozens of political prisoners, and the Obama administration reciprocated by inviting Azerbaijani President Ilham Aliyev—along with Armenian President Serzh Sargsyan—to Washington.

Little wonder, then, that Mr. Putin would use an unresolved conflict to try to undermine this neighboring government, as he has done in Ukraine. Few doubt Moscow’s covert ability to do so. It’s notable, for example, that the 2014 escalation of the conflict coincided with Mr. Putin’s efforts to elbow France and the U.S. out of the peace process through a unilateral summit he convened in Sochi. This year, the renewed fighting coincided with Mr. Obama’s Nuclear Security Summit and Mr. Aliyev’s first visit to Washington in 10 years. Mr. Putin benefits from reminding both parties (and the West) of his ability to wreak further havoc in a region already marred by conflict, lest they toe his line.

For the first time in 20 years, Azerbaijan managed to recapture control over territory in the recent fighting. It could itch for more, while Armenia might want to hit back to erase those gains. Thus, in the last year of the Obama administration, we could easily witness a growing escalation of conflict in the Caucasus. Yet through all this, the Obama administration is sticking to the urban legend that it “sees eye to eye” with Russia on the Armenia-Azerbaijan conflict, in the words of Amb. James Warlick, the U.S. representative at the peace process.

The current U.S. policy of denial only indicates that Washington doesn’t take the region seriously. If America wants to avoid a major war in the Caucasus, it needs to take the lead in a serious diplomatic initiative to engage both Armenia and Azerbaijan. That can only happen if Washington accepts that the Caucasus is part of the long arc of conflict ranging from Ukraine to Syria, and that America’s interests are fundamentally opposed to Mr. Putin’s.