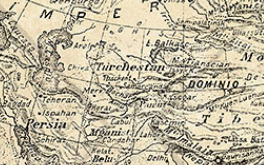 Read at The National Interest

With respect to Afghanistan, the United States, Europe, Japan, South Korea and the major international financial institutions are all caught in a time warp. Dating back a century and a half, this distortion today impedes Afghanistan’s development as a normal country. No less, it helps isolate the other countries of Central Asia from a nearby major market, the Indian subcontinent and Southeast Asia, and pushes the other countries of Central Asia into a one-sided relationship with their former imperial overlord, Russia. It’s time to correct this long-standing mistake.