America's New Strategy for Central Asia: Is it Happening?

In February 2020, the U.S. released a new Strategy for Central Asia, subtitled “Advancing Sovereignty and Economic Prosperity.” Since then, the world has changed. How is this Strategy being implemented? This Central Asia-Caucasus Institute Forum discussion will focus on the concrete steps to implement America’s Strategy towards Central Asia.

Our guest speaker Lisa Curtis, Deputy Assistant to the President and Senior Director for South and Central Asia at the National Security Council, The White House, discussed initiatives undertaken as part of the new strategy. 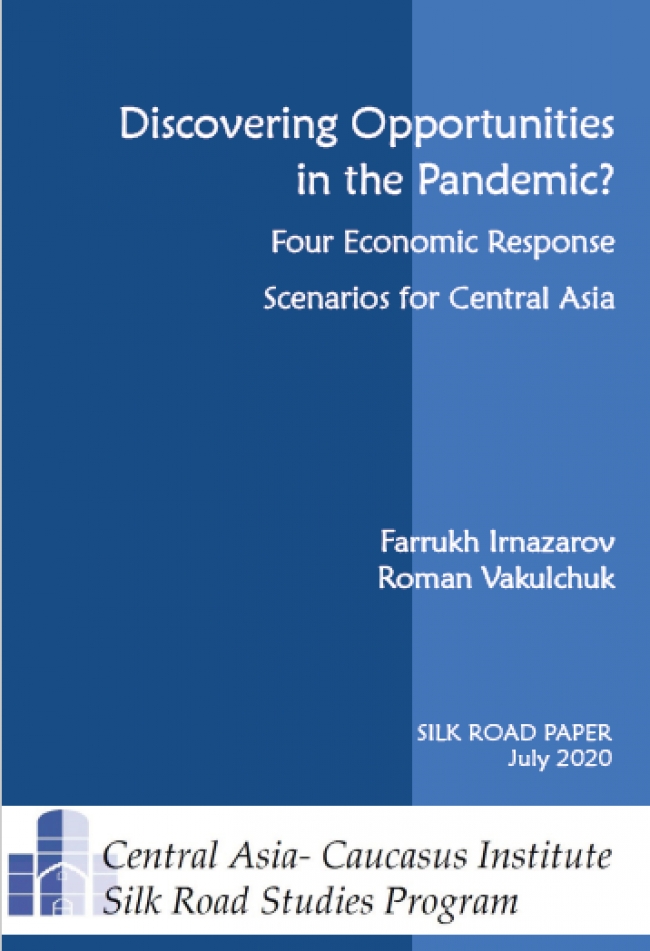 The COVID-19 crisis represents not only an 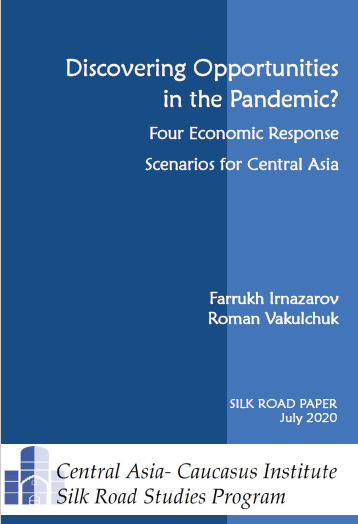 unprecedented economic disruption but also an opportunity for Central Asia. A specific economic policy response may trigger either game-changing reforms that can facilitate the development of full-fledged market institutions or lead to a protracted crisis that would jeopardize almost 30-year long market economy transition progress. As it is rather unclear where the recovery pendulum will make its final swing, the current situation provides fruitful soil for various assumptions. This paper proposes and examines four scenarios of economic response strategies for the region as a whole, and for Kazakhstan, Kyrgyzstan, Tajikistan and Uzbekistan in particular, that result in unique development trajectories. The paper employs the foresight methodology to build four scenarios related to the situation after the lockdown is fully lifted. The scenarios serve the purpose of helping decision makers to embark on informed decisions while shaping anti-crisis measures and better understand causality mechanisms behind their policy choices.

Kazakhstan Beyond Headlines: One Year of Mr. Tokayev's Presidency

President Kassym-Jomart Tokayev has now been in office for a year, providing an opportunity to take stock of his time in office. This Forum will focus on the significant internal reforms announced during the past year. But President Tokayev has not only focused on internal affairs. As Foreign Minister two decades ago, he played an important role designing Kazakhstan’s foreign policy. The Forum will focus also on the evolution of Kazakhstan’s foreign and regional policy during his year as President.

In lieu of our in-person annual gathering, the CAMCA Regional Forum organizers  are hosting a virtual e-CAMCA Week.

The June 2020 CAMCA Forum, to be held in Almaty, Kazakhstan, was postponed until June 2021. In its place, CACI and the Rumsfeld Foundation organized the e-CAMCA week of online events and publication. Find recordings of the e-CAMCA Week virtual events held over June 15th-19th at the CAMCA Forum YouTube Channel, as well a variety of original #CAMCAweek publications and resources for our CAMCA Forum community at www.camcaforum.org,. 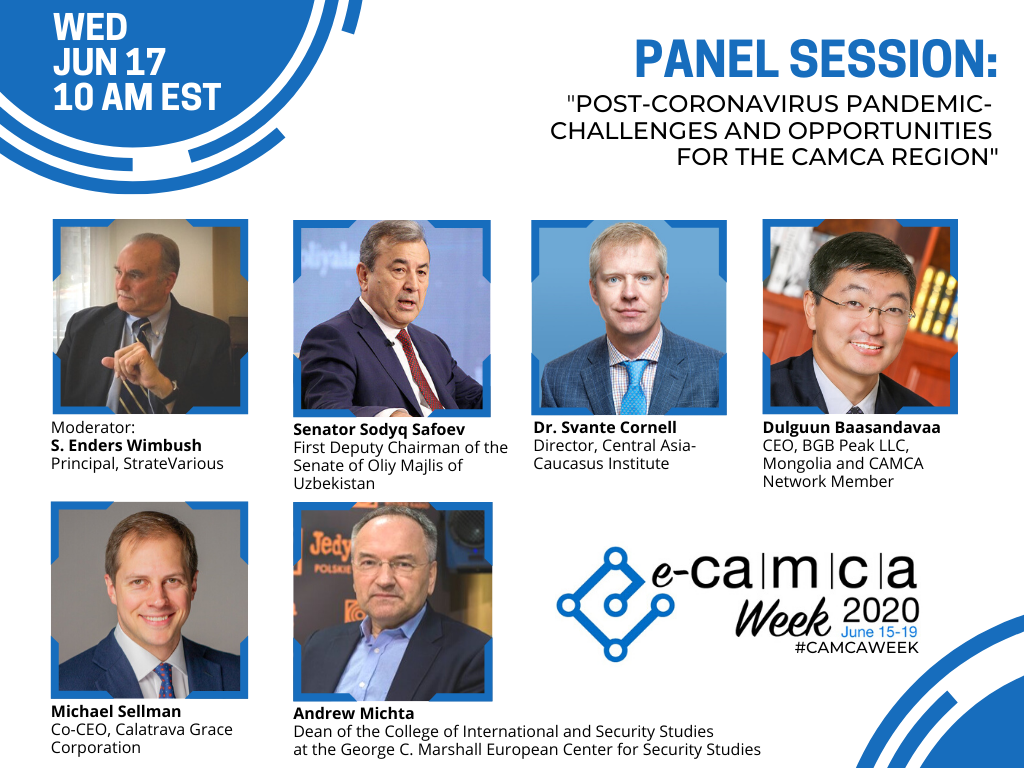 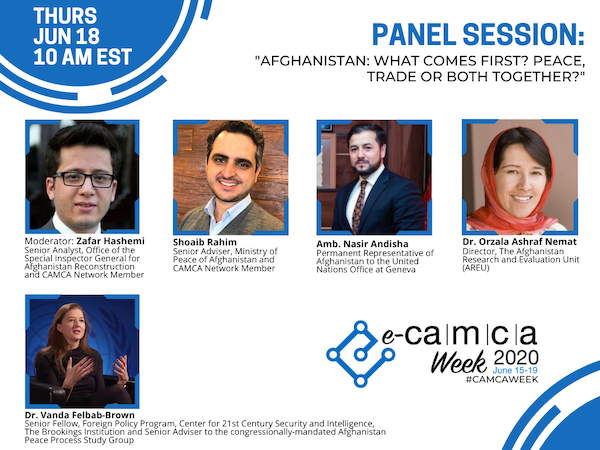 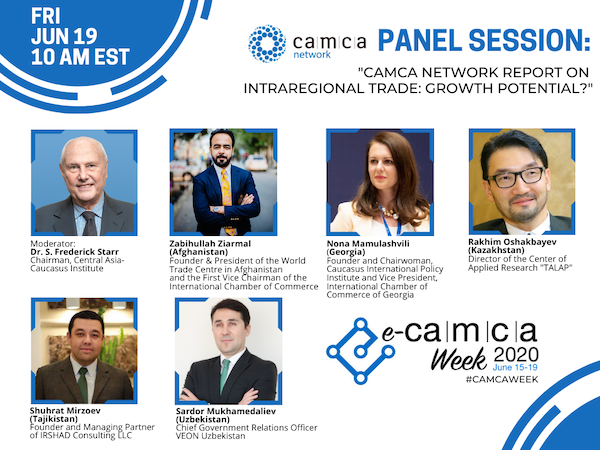 and Dr. S  Frederick Starr for

View features of some successful regional entrepreneurs from our CAMCA Network

Digital Transformation in the CAMCA Region

A comprehensive collection of brief commentaries on the short and long-term impacts – economic, political and social – of the COVID-19 pandemic on the CAMCA region.  Contributors to this unique publication include more than 20 experts and professionals from over 10 countries representing think tanks, business, academia, government and more.  Read these wide-ranging perspectives, including insights directly from the region, curated for our CAMCA Forum community.

Religion and the Secular State in Central Asia: The Examples of Kyrgyzstan and Turkmenistan 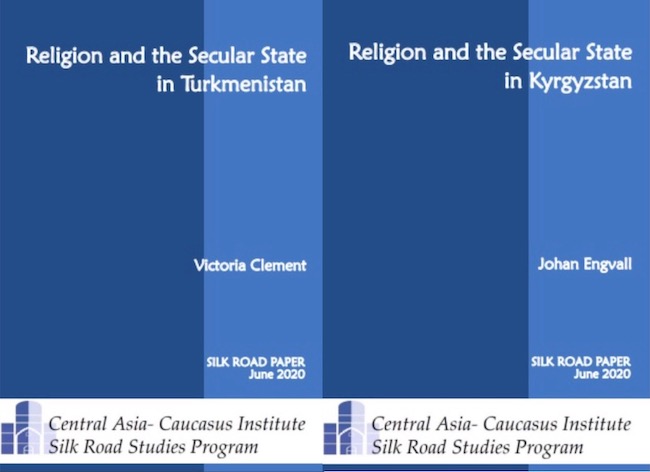 This event marked the publication of two Silk Road Papers on the state-religion relationships in Central Asia, a study of Kyrgyzstan by Johan Engvall and one on Turkmenistan by Victoria Clement. This forms part of the ongoing research effort on secular governance, religion and politics at the Central Asia-Caucasus Institute & Silk Road Studies Program Joint Center, and follows the publication of studies on Azerbaijan, Kazakhstan and Uzbekistan.
Johan Engvall’s study of Kyrgyzstan’s experience is timely given that country’s experience, starting with a more permissive atmosphere that subsequently aligned itself with policies in the rest of the region. Victoria Clement’s study of Turkmenistan is the first treatment of the subject to appear in print, and sheds light on the similarities of Turkmenistan’s approach with the rest of Central Asia as well as its specificities.

The Event was live-streamed on our Facebook page and is available on our YouTube page and here.